"Last year, South Africa's Greg Minnaar (Santa Cruz Syndicate), a three-time UCI World Champion, won a record extending 20th Downhill World Cup in Fort William, Scotland. What made these wins unique was that they were the first World Cup events to be won on a bike with 29" wheels. (..) So does this mean the debate is over, and 29" wheels have replaced 27.5" ones? Not so fast!"-- Thinking about wheels? Michal Cerveny [UCI news]

As my trusted old Cube bike died due to age (profuse hydraulic leaks, spare parts > 1 month away, while on bike holidays) it was clear I had to replace it. So I bought the useful (but not overly expensive) CUBE ACID, with 29" wheels, model year 2019, for something over 900 Euros. The dealer gave me a lower price than the indicated / recommended one.

More history is here [link] with my coolest bike mod so far being the Colnago road bike with switched Ultegra levers [link].

The frame is not very large, but the bottom bracket (Tretlager) sits slightly lower than the wheel hubs. With a 29 wheel size, one almost sits "between" rather than "on top" of the wheels. So, this consideration is not at all about speed: as right below elbow amputee, I wear a prosthetic arm to hold the handle bar on the right.

29" vs. smaller wheel size with regard to asymmetric balancing and stability from energy / fitness view

Stability for me is not just as easy as it is for two handed people as we found out over so many rides or trails.

There, to me, the larger wheels feel certainly like a considerable improvement in overall stability particularly for riding with asymmetry and consequential issues for stability - not when riding to the post office or to get milk at the gas station. But I particularly notice that I use far less energy to stabilize the bike on steep ascents, where a lot less core muscle work is required and more energy can be used for uphill riding. Also for very steep descents the larger wheels are easier to handle for me, balance wise. For peaceful straight level rides, any difference between 29" wheels and smaller may be negligible.

This is the overall view of how I ride the bike. I typically use the Toughware Equilux [link] as that device has both Voluntary Closing *and* Voluntary Opening options. Also, it's shape follows the Trautman hook [link] after which it was at least remotely modeled - and that means that even with a Voluntary Opening setting, you can comfortably idle or seriously ride the bike but forces of the handle bar won't pry open the hook device. So you can ride, safely and perfectly well, even by just using  the passive setting so to say.

Handle bar: left side with brakes and gear shifters

I placed the brakes so their handles would face each other. I filled up the space with a grip cover that I shortened a bit. Then I put these grip ends at the ends of the bar, great idea that was. My left hand loves to rest on the gray wide area of that thing on on the left side, the slightly widening shape prevents my prosthetic gripper from falling out.

Gear shifters up close show them to be easily stacked or piggy backed.

I later removed both gear indicators as they are just relatively bulky plastic parts and useless if you ride knowing what gear you are using.

That is the removed indicator, after I placed it back into a plastic bag. 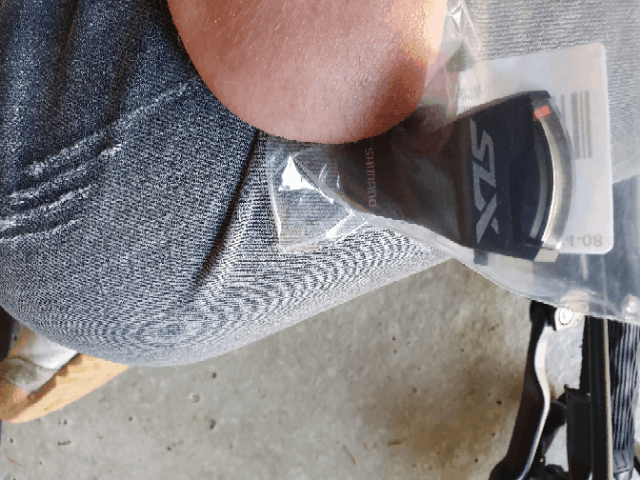 That is a bottom view on both piggy-backed shifters, now with a small lid instead of the bulky gear status indicator.

A better view on the brake levers. The left lever (for the rear brake) clearly is at the limits of the cable length. Next time there be new cables we need to make that a bit longer.

The shifters were piggy backed, and for that I removed the cover-indicator of the upside-down placed right sided shifter. I now ordered a slim cover to cover up the opening - but for now leaving that open is no problem.

Handle bar: right side with bell and poploc remove lever

I nudged both bell and poploc lever as far to the center of the bike as I ever could. I widened their rings and just as on the left side, added the grip covers.

To allow the right brake lever to work on the left side, I had to remove the tight cable binder, first one, from the down bar and put one with a wider bind.

I also found that my already disabled stability, so to say, would further increase by using really good pedals. So I use these metal pedals with screws, already had them on the old bike, and just moved them to the new one. As a note, I had placed the screws so the shoes (or my trousers and legs...) would be in contact with the screw heads, not the screw ends. So I did reduce injury risk and sole grip by just a bit.

Application of bike for riding

I could pretend that we just spray a bit of mud on it for appearances.

But that would not be true. First test of the bike was during light, later severe rain. No worries though, we made it to the alp.

I cannot adequately reproduce all the beauty of physically being on these paths and trails. I can only hint at this, if ever you have to find out yourself if that is good for you.

Also, we mostly ride together. Even though we don't do color matching.

While there are a lot of public forums and discussions over 26" vs. 27.5" vs. 29", you probably may need to test this one, practically, yourself. There is no other way from my view.

The dean of a faculty is offered a free wish by a ghost. The dean is offered to decide between unlimited wisdom and unlimited financial wealth. He takes his time to decide. He asks his wife. He asks his mistress. He asks his children. He consults with the faculty. He takes long walks. He treks in Nepal. He posts on Mensa boards. He discusses God, racism and the middle east on TNS forums. He confesses his sins. He sleeps in. He meditates. - And at the end, he meets with his colleagues of the faculty. Then he tells the ghost that he would prefer to obtain unlimited wisdom, and seconds later, that is bestowed upon him. As his eyes open wide and he looks shocked, his colleagues ask him "What is it?" and he slams the hand against his forehead yelling "I SHOULD HAVE TAKEN THE MONEY".-- -anonymous
...